History of the Choir

In the 1960’s David Fidler introduced a wider selection of music, much arranged by himself. The choir, although smaller in size, won the Mallory Cup at the Mid-Somerset Festival in Bath on four occasions.

The choir later separated from the Westinghouse Company and changed its name to Chippenham Male Voice Choir to open its membership to singers from the local area.

Bob Jones became conductor in the 1980’s and under his direction the choir re-established its former size to around 50 members. The repertoire was further widened and Bob arranged many pieces to suit the choir. Most concerts included a solo or two by Ron Morgan, Ronnie Park and others, plus humorous monologues by Peter Field.

Since the 80’s the choir has performed with many Brass Bands and Orchestras in the area and has twinned with the Choir (Chorale du Carroi) of La Fleche, France. The choirs meet every few years, in England then France and a strong association has developed.

In 1984 and 1986 the choir hosted the California Girls’ Choir during their European Tour. The choir also appeared at massed choir events at Cardiff, Cornwall, Exeter, and Wells Cathedral.
In September 1998 Bob Jones’s daughter, Sarah Gale became our pianist/accompanist.

Also, unfortunately, our soloist & President Peter Field passed away in 2018.

The Choir celebrated its 75th Anniversary this summer with a concert on Saturday 25th June at 7.30 at St Andrew’s Church, Chippenham.

They were supported by the Bath Spa Band and by renowned vocalist Jane Francis , as well as the ever-popular The Choir and partners enjoyed an Anniversary Dinner at Chippenham Golf Club on 17th January. A fine time was had by all, and the singing was improved (?) by the liquid refreshment that lubricated the vocal chords!

On 18th April we will took part part in the Calne ‘Spring Sing’; local choirs and singing groups performing in various locations round the town , culminating in a combined ‘Sing’ on the Green or in the Market Place. This included ‘The Frog Song’ (remember that?).

New Rehearsal venue
It was with great sadness the choir learned that the United Reform Church, St Mary’s Street, the choir’s home for rehearsals for many years, was no longer able to continue. The Choir had been rehearsing there for nearly 40 years, so it was with much regret that we packed up our store of sheet music, teacups, etc to move to our new rehearsal venue.

The Choir was most grateful to the Elders and Congregation of the United Reform Church for their help and friendliness over the years, and wished them well for the future.

From 11th January 2016, the choir began meeting for rehearsals at St Peter’s Church, at the junction of Lord’s Mead and Frogwell, Chippenham.

The choir celebrated its 50th anniversary in 1990, its 60th in 2000, and of course its 70th in 2010 and encourages younger members to join so that the choir will continue to flourish.

The Choir held its annual ‘Christmas Cracker’ concert in the refurbished Neeld Hall, using the traditional seating format as opposed to using the new tiered seating. The choir were supported by the Bath Spa Band, the ‘4+1’ jazz band (on this occasion further supplemented to be the ‘4+2’) and, as ever, Peter Field and his monologues. Mention should be made of the important contribution made by the audience as they joined in the communal carols and songs.

The Neeld Hall was full to capacity and a fine time was had by all.

The choir were invited to perform at St Andrew’s Church Devizes for their Christmas concert. The church was beautifully decorated by the congregation on the theme of ‘Angels’. The photo below gives some idea of the effort involved, and the effectiveness of the result. The choir and audience enjoyed the performance, although it must be said that the choir didn’t look particularly angelic! 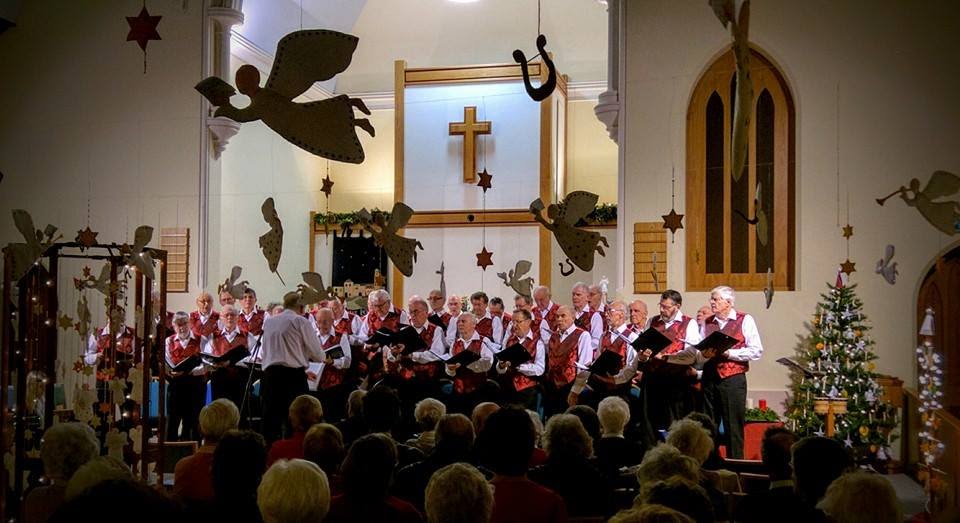 Everyone at St Peterâs made us most welcome, and we thanked them most sincerely for making the transition so simple.

For a variety of reasons our annual concert moved from the Neeld Hall to St Andrew’s Church. Dispite some misgivings this proved very successful. We also changed the format; entertainment was provided by the choir, the ‘4+1 jazz band’, piano duets from Sylvia Staples and our accompanist Sarah Gale, and the wonderful Peter Fields, who fought off a recent spate of ill-health to entertain us with his monologues. From the choir’s perspective, one advantage of the new venue was that we were able to enjoy the other performers without having to watch them over our shoulders on the stage! The audience made a great contribution with the communal carols and Christmas songs.
An Excellent Evening

CMVC gave several performances in the first four month of 2017, including at the Assembly Rooms, Devizes, Steeple Ashton Church and contributing to the excellent annual ‘Calne Spring Sing’. We also enjoyed a social event for members and partners held at the Leigh Park Hotel, Bradford upon Avon, We had a very good lunch, and were entertained by our old friends, the ‘Four plus One’ jazz group. Needless to say, we managed a few songs ourselves! 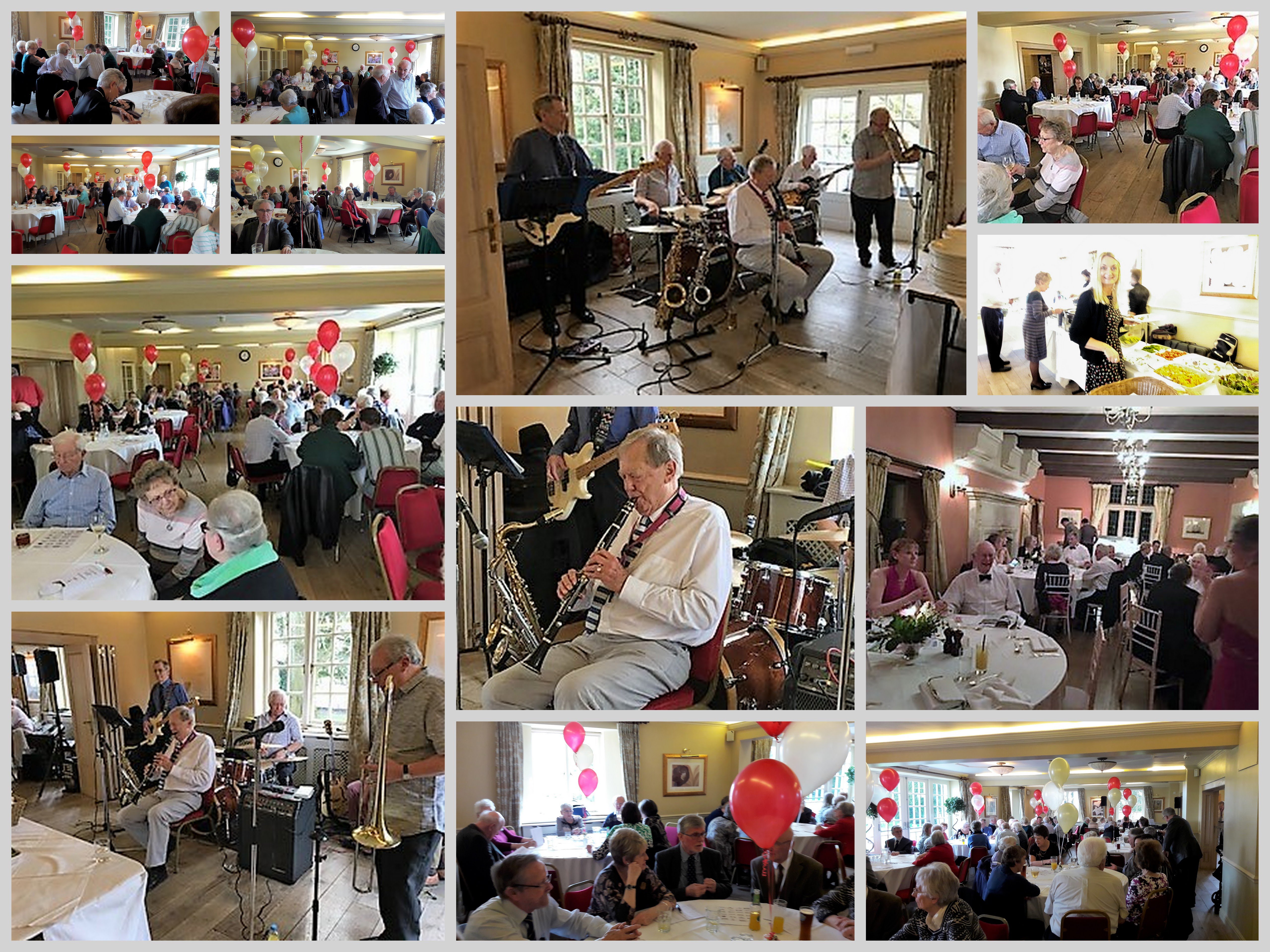 At the end of October the choir had to bid a sad ‘au revoir’ to Bob Jones, our conductor for 37 years, who retired. At the same time we lost our accompanist of 19 years, Sarah Gale, due to other commitments. However the Choir continued its activities and was very fortunate to have so quickly obtained the services of two new people, Mr Howard Topper as Conductor and Mrs Mary Ballard as Accompanist. Refer to CMVC Musical Team for more information about Howard and Mary.

After 37 years in the role of Choir Conductor it was with great regret in September 2017 that Choir Members heard that Bob had decided to retire from the Choir. Bob and the committee had been looking out for a new Musical Director for a couple of years and it was finally decided to take the ‘bull by the horns’ and advertise.

There will be many happy and enjoyable memories from the choir practices which were always held with good humour and patience, particularly when learning new songs!

Also over the years there must have been more than 600 Concerts. By far the majority of the Concerts were Fund Raisers for local and national Charities, Church Funds and other local organisations.

There were also a number of twinning exchange visits with the La Fleche Choir, a visit to Cardiff Arms Park to sing with the World Choir, and weekend visits to Cornwall with concerts and return visits to Chippenham.

Bob is an extremely accomplished woodwind player, seen above playing with the ‘4+1’ jazz group at a choir social event.
He was involved in many musical areas over his life, including choral work with Swindon Music Society, opera â including many solo parts with Bath Opera Group – together with dance band, jazz band, pit orchestras and concert instrumental solo work on a frequent basis. He also made numerous choral arrangements for the choir.
Also in September it was again with much regret by Choir Members that, after 19 years in the role, Choir Accompanist Sarah Gale had decided that that she would like to finish as accompanist due to other commitments in her life.

Sarah was born and educated in Chippenham. She is Bob’s daughter so it is unsurprising that from an early age, music played a significant role in her life! Many evenings were spent listening to instrumental and choral rehearsals downstairs or musical arrangements being made for different musical groups. She began learning the piano at the age of six.
A qualified teacher, she continues to use her musical skills. After 19 years she would like to devote more time to her family.
Members of the choir wish both Bob and Sarah ‘All the Best’ for whatever they chose to do in the future.